This article is about the best foods for anemia. However, before we get into these foods to help with anemia, let’s learn a little more about this condition.

The word anemia means “lack of blood”. However, it is used to describe a reduction in erythrocyte (red blood cell) count in the blood. These cells are those that give blood its red color and those that transport life-giving oxygen to all of the body’s cells.

Anemia may be caused by various mechanisms. Diet plays an essential role since foods provide the necessary nutrients for blood cell production.

Contents hide
1 These are the most frequent causes of anemia:
2 Best Foods for Anemia
2.1 Related posts:

These are the most frequent causes of anemia:

LEGUMES: All are rich in iron, folates, proteins and other nutrients needed for blood production.

SOY: Soy is the most iron-rich of legumes. Its derivatives are also good sources of this mineral. For example, “tofu” contains 5.36 mg/100 g of iron (about three times more than meat or soft cheese) and soymilk or soy beverage contains 0.58 mg/100 g (about 10 times that of cow’s milk).

FRUIT: All fruits facilitate the absorption of iron, particularly acidic fruits. A study conducted in Houston (Texas, USA) found that when the iron is taken with milk the absorption rate is 5.7%. On the other hand, when it is taken with fruit juice, the rate reaches 13.7%.

LEAFY GREEN VEGETABLES: Leafy green vegetables such as spinach, chard, and lettuce are iron-rich. They also provide magnesium (which forms part of chlorophyll) and trace elements such as copper, which foster the development of blood cells in the bone marrow.

RED BEET: Beets are among the best foods for anemia thanks to its richness in iron (as much or more than meat), and vitamin C. Due to some of its little-understood substances, it stimulates blood production in the bone marrow. The most effective way to use beets is by drinking 50 to 100 ml of freshly prepared juice before meals.

SPINACH: Spinach contains more iron than meat, although it is difficult to absorb. It supplies various vitamins and trace elements that promote red blood cell production.

AVOCADO: The avocado is one of the most iron-rich fruits, which is absorbed fairly easily since it also contains vitamin C.

SUNFLOWER SEEDS: Sunflower seeds are rich in iron, other minerals, and vitamins B and E. Eating unsalted sunflower seeds is particularly recommended for those who are undernourished, anemic, or convalescing.

PISTACHIO: Pistachios are another one that’s on the best foods for anemia top list because of its richness in iron as well as copper, and trace elements that mutually potentiate their anti-anemic properties. Copper facilitates the absorption and assimilation of iron.

GRAPE: Grapes finds itself on the best foods for anemia list because it is the most iron-rich of the fresh fruits. Also, grapes contain copper and other trace elements that facilitate the absorption and assimilation of iron.

PASSION FRUIT: Passion fruit is a good source of both iron and vitamin C, which makes it a great addition to the list of best foods for anemia.

APRICOT: Despite not being particularly rich in iron, the apricot, fresh or dried, has a significant anti-anemic effect. An apricot treatment may be compared to a treatment using liver in terms of effectiveness in improving iron deficiency anemia.

LEMON: Lemon facilitates the absorption of nonheme iron found in fruits, vegetables, legumes, grains, and even milk, and eggs because of its vitamin C and organic acid content. A few drops of lemon juice added to salads or grain or legume dishes improve iron absorption and are particularly beneficial in cases of anemia.

SPIRULINA: This microscopic blue-green bacterium, which has been considered an alga up to now, is very rich in iron. It also contains vitamin B12, which is essential in certain types of anemia. However, some investigators believe that the vitamin B12 found in spirulina is not well assimilated since it is chemically different from the true vitamin.

MOLASSES: Molasses is a great member of the best foods for anemia list because it is among the most iron and mineral-rich of natural products in general. As a sweetener, it is an excellent replacement for white sugar, which has virtually no iron or other minerals.

IRON: This is the nutrient most involved in red blood cell production, and the one that is most often in short supply. The problem with iron is its absorption within the intestine. This is particularly so for nonheme iron (that from non-meat sources). Vitamin C, certain acids, and copper facilitate the absorption of this type of iron.

MEAT: Meat, particularly liver, has been used for generations as a treatment for anemia because of its content of heme iron, which is more easily absorbed than the nonheme iron found in plant-based foods, milk and eggs, and vitamin B12. Although meat may be useful in certain cases, it is not essential for blood production and its use presents many drawbacks.

VITAMIN B12: The lack of this vitamin produces few very large red blood cells, a condition known as megaloblastic anemia or of large cells. Although the daily need for this vitamin is very small, a poorly maintained strict vegetarian diet can lead to a deficiency in this vitamin.

FOLATES: Folates are necessary for the production of red blood cells. Folate deficiency reduces the number of cells produced and increases their size. Folates are found particularly in legumes and green leafy vegetables.

B GROUP VITAMINS: Vitamins B1, B2, and B6 contribute to blood cell production, and their lack can aggravate any type of anemia.

VITAMIN E: Vitamin E deficiency leads to fragile red blood cells that are easily destroyed, which leads to hemolytic anemia. A proper supply of vitamin E stabilizes these cells and avoids the condition.VITAMIN C: Vitamin C can increase the bioavailability (a measure of absorption) of iron by almost double. Vitamin C has also been shown to compensate for the reduction in iron absorption caused by the phytates contained in whole grains. 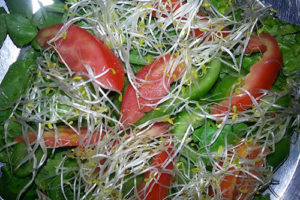 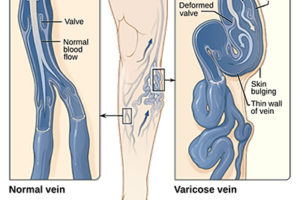 What are Varicose Veins?